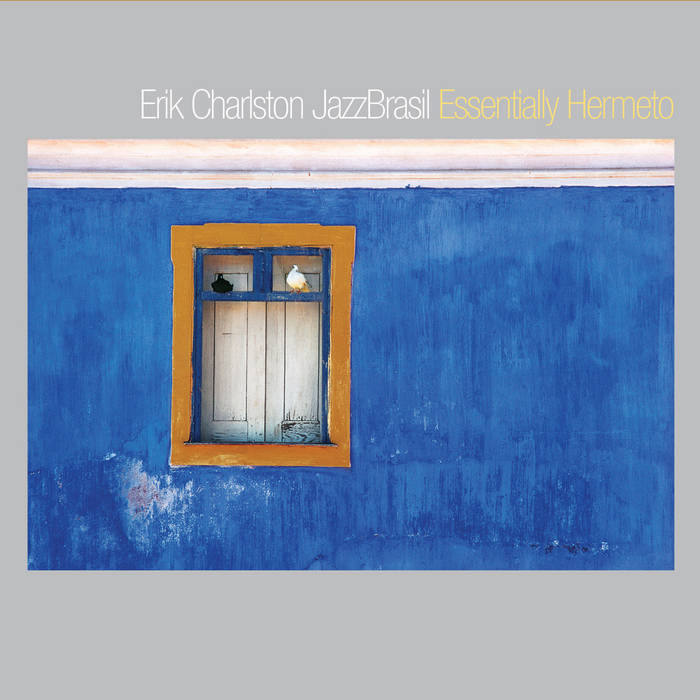 Essentially Hermeto – a compelling celebration of the great Brazilian composer Hermeto Pascoal – is the debut album from Erik Charlston and JazzBrasil. Hermeto’s music combines powerfully earthy, traditional Brazilian rhythms with highly sophisticated jazz harmonies. Embodying this rich duality, JazzBrasil, led by Erik Charlston on vibraphone and marimba, combines the Brazilian percussion team of Rogério Boccato and the legendary Café with the elite of New York’s jazz scene: Ted Nash on sax, flute and clarinet, Mark Soskin on piano and Jay Anderson on bass. Hermeto’s music is passionate, humorous, grooving and demanding – yet can be achingly beautiful. This group lives to bring out all these characteristics, while creating its own sound world.

“I’ve always loved Hermeto’s music: its energy, absolute originality, audacity and beauty. Oh yes, and it grooves like mad. Hermeto’s music, like that of other great composers, benefits from interpretation, and although it will sound different in new contexts, it will always be undeniably his music. The challenge of putting a group together to interpret it became irresistible,” says Charlston.

“I was curious to see how Hermeto’s music would sound if played by some melodic players coming primarily from a jazz background alongside percussionists who really speak Hermeto’s rhythmic language. I wanted a saxophone player who could also play flute and handle Hermeto’s crazy ‘choros’ on clarinet, which would blend so well with my marimba. I’d worked with Ted Nash for many years and he was my first choice, as he plays all these instruments with a kind of dazzling fluidity. I’d also played quite a bit with Mark Soskin. His energy, buoyant sound and spirit on the piano really keep the music moving forward. The same can be said of Jay Anderson, from whom I’ve learned an awful lot about creating a sound that is both full and beautiful but also dynamic and propulsive. Needless to say, none of this would work without the beating heart of this music: its rhythm. In Rogério Boccato and Café’s percussion, there is power, grace, sensitivity and soul. Their knowledge of the Brazilian rhythm world informs everything we do,” explains Charlston.

Recorded at New York’s Avatar studios, each composition has its own unique meaning for Charlston. “‘Vale da Ribeira’ was written by Hermeto literally deep in the rainforest where he and his group were recording music for a documentary. They were in the Ribeira Valley when he saw the sun rise and wrote this piece. With its bouncing melody and grooving ‘baion,’ it serves as the group’s favorite concert opener.

“‘Rebuliço,’ which means ‘Uproar,’ is a typical Hermeto treatment of a traditional Brazilian song form, the ‘choro.’ It starts in one place and ends in a very different place. The blend of the earthy, wooden sounds of the clarinet and marimba with the rest of the band on this piece seems to work especially well.

“Hermeto dedicated ‘Santo Antonio’ to his parents. It reflects a festival in his hometown in honor of St. Anthony, the patron saint of weddings. Whereas Hermeto played this uptempo, we play it here as a ballad—a love song.

“‘Essa Foi Demais’ is a ‘maracatu,’ set up by Café’s solo on the berimbau. This rhythm, from the northeast of Brazil, is a nice contrast to everything else on the recording—and is fun to improvise over,” says Charlston.

“‘Hermeto’ is a beautiful bossa/samba. A big part of JazzBrasil’s identity is our instrumentation, and the flute/vibes combination was a natural for this lovely, flowing melody.

“The song ‘Paraíba,’ describes the people from the northeast region of Brazil, specifically from Paraíba, having to leave their land and move to São Paulo and Rio because of a terrible drought. The singer is expressing their ‘Saudade’ -- that feeling of missing one’s land -- and ‘sending an embrace’ to his homeland, Paraíba, saying that although it is a small land, it's a very strong one. This piece was written by Humberto Teixeira and Luiz Gonzaga, King of the Baion.

“‘Frevo Rasgado’ was written by the great Egberto Gismonti.” Says Charlston, “It’s wonderfully rhythmic, has a long, soaring melody and has a kind of built in energy that makes it a real pleasure to play. I always like varying our instrumentation, so we decided to do this as a piano/vibes duo.”

Of the album’s last piece Charlston says, “Finally, we always like to go out with a samba. Hermeto’s ‘Viva o Rio de Janeiro’ is a great vehicle for everyone in the band, but especially for Rogério and Café, who appropriately take this one out. This piece reminds us what joy Hermeto brings to his and our lives.”

ABOUT ERIK CHARLSTON
Jazz vibraphonist Erik Charlston, a native of Chicago, has a diverse career centered in New York, where he currently leads his JazzBrazil sextet. Charlston has also performed and recorded with Wynton Marsalis, Fred Hersch, Steve Coleman, James Carter, Sam Rivers, Dave Brubeck, and Orlando Puntilla Rios, among others. He has performed with Sting, Billy Joel and Elton John at Carnegie Hall, and with the Orchestra of St. Luke’s, he played with Metallica at Madison Square Garden. Alongside Bill Frisell, Gil Goldstein, Marty Ehrlich and Greg Cohen, he has interpreted the music of the classic film composer Bernard Herrmann in London with the BBC Symphony, in France with the Orchestre National de Lyon and most recently with the Chicago Symphony Orchestra. In New York, Erik performs regularly with the New York Philharmonic, with Encores at City Center, and on film soundtracks from Disney’s “Aladdin” to the recent ”Julie and Julia” and Coen brothers’ “True Grit.” A frequent performer on Broadway in “Hair” and “The Lion King,” he has also played extensively with the Orchestra of St. Luke’s, as well as the Chamber Music Society of Lincoln Center, the Orpheus Chamber Orchestra, the Metropolitan Opera Orchestra, Moscow’s Moiseyev Dance Company, the Radio City Music Hall Orchestra and as soloist on Garrison Keillor’s “A Prairie Home Companion.” Recording credits include radio, television, films, and record labels such as Sony, Gramavision, Telarc, EMI, Newport Classics, Nonesuch, and French Antilles. Outside New York, he has performed chamber music throughout Europe and Japan, and with the New York Philharmonic, has toured extensively throughout North and South America, Europe, and Asia. He is currently co-chair of the percussion department at the Manhattan School of Music.

Bandcamp Daily  your guide to the world of Bandcamp

Featured sounds by K.Spark and WIZDUMB, plus Basi joins the show to discuss his latest release.