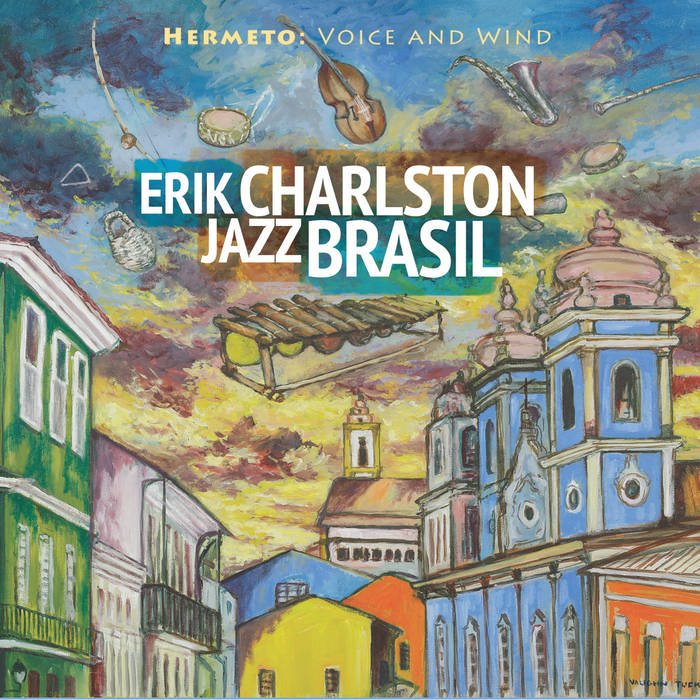 From his earliest days, vibraphonist Erik Charlston has been attracted to a wide spectrum of musical sounds. His simultaneous introductions to classical and soul music along with his exposure to the African-inspired street drummers near his childhood home in South Chicago prepared him for his multi-faceted career as a professional percussionist covering many genres.

That mélange of early sounds also propelled him toward challenging music without boundaries. His quest for mind-bending music led him to one of the most celebrated musical geniuses and idiosyncratic minds of the past fifty years, the Brazilian composer/performer Hermeto Pascoal. The influence of Pascoal and his musical catalog led Charlston to create his JazzBrasil ensemble and to record his new album, Hermeto: Voice and Wind.

Being from Chicago, Charlston had a wide breadth of musical exposure. His school friends were in soul and funk groups. Jazz was an influence in and out of the home, not to mention that his mother was a classical vocalist who instilled the importance of lieder and art song in her son’s musical vocabulary. After moving to New York City, Charlston became involved in musical projects of all description, from jazz ensembles to commercial work and symphony orchestras to Broadway.

It was Charlston’s friend, percussionist and Brazilian music expert Gordon Gottlieb, who introduced the vibist to Pascoal’s unpredictable genius and to his style, which is fearless, but respectful of tradition. Charlston was immediately attracted to the way Pascoal combined many different musical cultures with his own brilliantly twisted music. Charlston reflects: “Tradition and near insanity are close brothers in Hermeto’s world.” Inspired by all of this, Charlston created JazzBrasil, a band built with the intention of melding the harmonic sophistication of jazz to the rhythmic intricacies and variation of Brazilian music.

An integral association that Charlston made was with Brazilian keyboardist Jovino Santos Neto. Neto was a one-time member of Pascoal’s touring ensemble and had access to original scores and first hand knowledge of the composer’s approach to music. Neto’s influence and suggestions helped provide a spark and many musical choices for JazzBrasil as it continued to evolve.

Over the past seven years, JazzBrasil’s repertoire continued to grow and it became apparent that it was time to record. The group’s musical canon had also incorporated tunes from other composers, including the great Brazilian guitarist Egberto Gismonti and singer-songwriter Lenine. The ensemble was able to reconvene at Avatar Studios in New York City in 2017 with the aid of engineer Adam Abeshouse. The only substitution from the original ensemble was the addition of the versatile percussionist Keita Ogawa instead of the group’s regular percussionist, Café.

The recording begins with Pascoal’s striking baião “Voz e Vento,” here with a very different arrangement from the original featuring a 6/8 rhythm feel and contrasting sections. Charlston chose Lenine’s beautiful “A Gandaia Das Ondas/Pedra e Areia” because it reminded him of Faure’s “Clair de Lune” and its imagery of the ebb and flow of the ocean being like that of life. Charlston’s “Maracatu Blue” uses the north Brazilian maracatu rhythm in a blues form to great effect while Pascoal’s delicate “Os Guizos” features a harmonically expansive duet between Charlston’s vibes and Soskin’s piano.

Pascoal’s “Fatima” is named for his oldest daughter. Charlston dramatically rearranged the piece so that it begins with a chromatic whirlwind that switches to a more traditional choro, highlighting the clarinet of Nash. The joyful “Alegria do Vaqueiro” is a traditional cowboy song from Brazil that celebrates the sound and movement of the herds across the plains, the ensemble making it into a percussion led highlight. The gorgeous melody of “Nem Um Talvez” was first heard on Miles Davis’s Live/Evil and is performed here by Nash’s flute supported by marimba and bass.

Egberto Gismonti’s buoyant “Lôro” is introduced by Charlston’s dancing marimba before the band tears into the appealing baião. “A Fala Da Paixão” is another Gismonti composition, which has Charlston’s marimba providing a space for an intimate conversation between Soskin’s melodica and Nash’s clarinet. Pascoal’s super dynamic samba “Aquela Coisa” is a typical set closer, allowing the energy of the two percussionists to really shine. The asymmetrical “Nas Quebradas” is an encore of sorts and shows the playfulness of Pascoal’s amazingly fun writing.

Erik Charlston has been intrigued by the sound of surprise since his childhood. It is no wonder that he has been so drawn to the inexplicable delights of the music of Hermeto Pascoal. The music that Charlston makes with JazzBrasil is a delightful tribute to the Brazilian legend and can be heard to astonishing effect on Hermeto: Voice and Wind.

Bandcamp Daily  your guide to the world of Bandcamp

Featured sounds by K.Spark and WIZDUMB, plus Basi joins the show to discuss his latest release.